Ranting from the Road

Recently, I went for a two-day trip to Wuhu, a city in Anhui Province. I had been wanting to get out of Nanjing for quite some time, but I was busy with graduation and all that stuff.

So when I decided that it was a good moment to finally go somewhere for two days, I started checking places around Nanjing on the map to see what can be visited nearby. I had already visited most of best-known cities of Jiangsu, so I searched for a place with some kind of a park or a mountain and then checked if the train ticket or hotel prices weren’t too pricey for me. Wuhu seemed to meet the requirements because it only takes 40 minutes to reach it from NJ by high-speed train and the train ticket is around 30 yuan.

Wuhu is the second biggest city of Anhui province (the first being the capital of the province, Hefei). Its name means “weedy lake”. The city is, true to its name, filled with lakes, rivers and all kinds of small ponds – it even has some swamp areas to visit. There’s also a quite well-known amusement park there – Fantawild Adventure Park (芜湖方特欢乐世界) – supposedly, the biggest theme park in China. I’m not a fan of amusement parks and I’m scared to death of rollercoasters and such, so obviously I was not gonna go there. Instead, I was looking to spend some quiet time out in nature to escape the crowds and the bustle of a big city, and for that purpose, less popular places are better.

I first went to check out a place called Phoenix Mountain. It was shown to me as recommended in an app called Mafengwo (quite a good app to read about places you want to visit) when I was doing my research about Wuhu. People wrote in the app that this place was free of charge and that there was an interesting, blue lake there to check out. So I first took two buses to reach the southern area of the city, Yijiang district (around 18 km from the center). I got off one stop earlier to have some breakfast – I was super hungry from having to get up at 5 a.m. and not being fully rested.

After eating, I started walking towards the lake I wanted to see. I had to walk for about 3 km. I didn‘t mind since if I hadn’t got off one step earlier, I would have to walk for over 2 km anyway. On the way, I could see some rural landscapes of Wuhu. 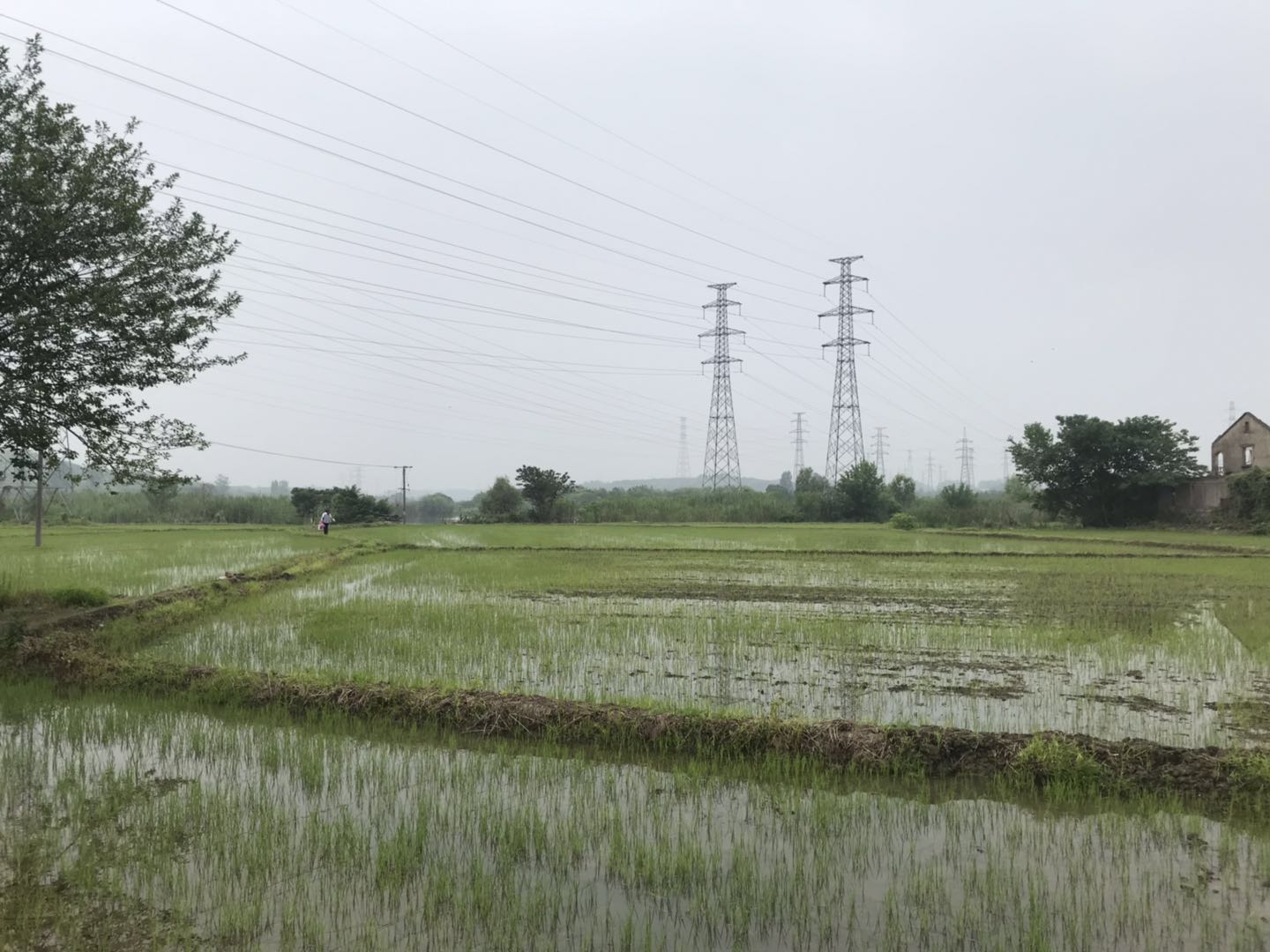 After a while, I finally reached the lake people were writing about in the app – it became popular online because of its unusual blue color and dubbed as the ‘blue jewel’ of Wuhu (on the pictures the color is not that vivid because it was a cloudy day, but the water truly was quite blue). It reminded me of the quarry back in my hometown, Cracow. Similarly enough, this lake also used to be a quarry – I’m not sure what used to be mined there though, from what I read it seems it might’ve been iron ore or nickel ore. According to the information I found online, the water in the quarry is on average 20 m deep; because the water in it is highly alkaline and quite polluted, it’s currently waiting to be “managed/fixed” and it’s not advised to hang around it.

There were no people there when I was walking around the lake. The soil was quite muddy and it stuck to my shoes. There was only one small steel hut in which, I suppose, was sitting a guard looking after the place (I could hear the sounds coming from his phone as he was watching something). I was being quiet so he didn’t hear me. After a while, I decided to circle around the lake and take a look from another side.

On the way, I noticed that there were many graves around. In many rural areas of China, you can see gravestones erected on the slopes of a hill or a mountain. According to Chinese feng shui (geomancy), the best, most auspicious position is that facing water and having a mountain in the back (for example, the Forbidden City in Beijing was build like that). Being surrounded by mountains also guarantees good feng shui – which is why many tombstones have their backs facing the slope. Also, in the past, because arable land was a precious resource, people chose to bury people in the mountains in order not to waste the land. That is why I saw so many graves.
In the places without hills I also saw gravestones put between the cultivated fields – apparently, farmers prefer not to buy a spot in a public cemetery, but to bury dead relatives in the ground. It’s not exactly legal to bury people wherever one wants without permission, and also Chinese government is strongly pushing for cremation /the reason being that traditional burial requires a lot of resources, for example, a coffin requires wood to make and it also needs more space on a cemetery than an urn). However, cremation is against Chinese tradition – being placed in the ground after death means peace for the spirit of the deceased. Hence, in the countryside, many people still erect gravestones on a hill or at least on a field.

After walking around for a little bit, I decided to go back to the city. I went to visit one of the parks of Wuhu, Zheshan Hill Mountain Park. It was a pretty standard park with a lot of people in it, especially elderly people. I think it’s kind of admirable how the elderly in China seem to have lots of activities to take part in and always gather together outdoors. For instance, in this park, there were many older people watching opera performances or playing music, or singing.

Then, I went to a nearby Buddhist temple – Guangji Temple. The temple was partly under construction, but the ticket was quite cheap – only 5 yuan.

After resting there and getting bitten by tens of tiger mosquitoes, I went to my hotel. I booked it close to the area I wanted to visit on the next day – Jiuci Old Town. It was rather far from the center, but I figured that in the morning I would be able to get to the old town on foot.
Here, I would like to say that in China it’s advised to call the hotel and ask if they allow foreigners to stay before you go there. Not every hotel does. For instance, at first I booked a room with breakfast included in the price, and it was a pretty good deal for around 110 yuan. However, upon calling the hotel I found out that they didn’t receive foreign guests after all, even though in Qunar app it is stated that this particular hotel does accept foreigners. So I had to change to something else. It was also alright – a double room for 112 yuan. The only thing is that it was quite dark, I don’t know why hotel lights are often so dim. Anyways, it’s good to always check with the hotel.

On the next morning, I ate breakfast bought from a street vendor – soy milk, steamed dumplings and a baked bun with sesame – and started walking towards the old town. On the way, I pulled out my phone and started checking some facts about the old town – and then I found out that it was actually a new old town. Meaning, it was a modern, man-made replica resembling an ancient Chinese town. The price ticket was 50 yuan. From the outside, it looked quite nice, but the thing was that I had already seen so many man-made old towns in the past… So I decided to skip it. As I was sitting close to the entrance, I did some research on my phone. As it turned out, there was another old town in Wuhu, this one for real – called Xihe Old Town! The only problem was that it was 50 km south from the place I was at… Anyways, I found instructions on how to get there on the Internet – it said that I could take a public bus to Mayin Coach Station and from there, a long-distance bus to Xihe. So I did that – I first walked all the way back to a bus station which was close to my hotel and then rode a bus for about an hour. I got off when the bus reached Mayin Coach Station. However, there was no coach station to be seen.

I asked a street cleaning lady about the long-distance bus station and she said that the nearest station was Yijiang Station – it’s a station for high-speed trains and there is a bus station next to it – Wuhu Southern Bus Station. So I went back to take the same bus and rode for two more stations. Then I went to the ticket hall to take a look at the screen showing available destinations – and Xihe was not on the screen… Feeling exasperated, I walked to the only ticket window open and I asked the clerk about buses going to Xihe. To mu surprise, he said that there were buses going there – I just had to go inside the departure hall and then buy a ticket after boarding the bus. I had to wait for about half an hour before the bus finally departed (buses don’t go to Xihe frequently). It was an hour-long ride and I could admire the countryside views as we left the urban area of the city.
After I got off the bus, I started walking through the town. It was quite empty – I guess it’s not that popular among tourists, or perhaps it becomes more lively on weekends.

Some of the building were better preserved and open to the public. There were filled with old furniture and pieces of art. I guess that someone was supposed to be inside them and guard the exhibits, but the houses were all but one empty, allowing me to explore them completely by myself.

It was clear that some of the buildings were still inhabited. Even though the town didn’t seem populous, there were some elderly people playing cards or mahjong inside some of the houses.

I really enjoyed the visit to this old town. The main reason was that it was an authentic place rather than a modern copy, and you could see that it was still being inhabited; also, it was far away from the city and there were very few people on the streets, so it was quiet and peaceful – and that was what I needed. On top of that, the weather was beautiful and sunny, and the views of the old town and the area close to it were quite wonderful. Also, it was completely free – excluding the price of the bus ticket.

After spending a few hours in the old town, I decided it was time to go back. I rode to Wuhu Southern Bus Station again and took a train from nearby Yijiang Station back to Nanjing. All in all, I think the trip turned out quite well!

One thought on “My Two-Day Trip to Wuhu” 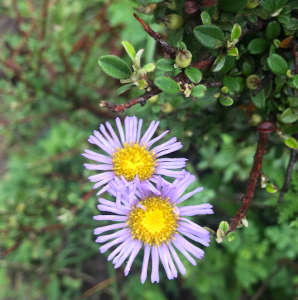 I’m Wandering Xuan – wandering around certain places and wondering about certain questions.
Hopefully, I can share some experiences with you, inspire you and give you some food for thought.